When most people think of civil engineering, images of construction sites, bridges and tunnels probably come to mind. However, a recent collaboration between Arizona State University and the Mayo Clinic puts civil engineers in a new light.

Putting this concept to the test, Rajan has led a number of projects at the School of Sustainable Engineering and the Built Environment, part of the Fulton Schools, with private companies such as Honeywell and Raytheon and organizations government agencies such as the Federal Aviation Administration and NASA. . He has helped test materials for everything from jet engines to body armor – efforts that have not only broadened his knowledge of civil engineering, but also that of his students and research assistants who also participate in the studies.

“If you ask a person on the street or even a practicing civil engineer if civil engineering skills can be used to answer questions about bone fractures, the answer will inevitably be ‘no’; there is no connection between the two. However, there are a lot of connections,” says Rajan.

In his latest research project, Rajan uses his expertise in civil engineering to help forensic researchers draw more accurate conclusions about the impact of trauma on the human body.

With a long history of applying civil engineering mechanics to various research projects, Rajan was contacted by researchers at the Mayo Clinic in Arizona. The team is actively working on a project that could redefine the process of identifying trauma to human remains. Specifically, the research could allow forensic anthropologists to more accurately determine when blunt force trauma may have occurred to a human body, and ultimately whether the trauma played a role in death. of somebody.

“This work is important for forensic pathologists because knowing whether a fracture occurred perimortem – at the time of death or around the time – compared to postmortem can give us important information about the cause and manner of death. with crime scene investigations,” says consultant Natalie Langley. in the Department of Laboratory Medicine and Pathology at the Mayo Clinic in Arizona and Chairman of the American Board of Forensic Anthropology.

Langley explains that the femur bones come from men between the ages of 50 and 80 who have donated their bodies to scientific research. These demographic variables were chosen to control for differences in bone composition related to gender and age. The bones are then heated at controlled temperature and humidity for varying times to simulate the loss of elasticity experienced by the bones during the post-mortem interval.

“Bone is an elastic material, and it retains its elasticity for some time after death,” says Langley. “By heating the bone we are able to reproduce longer periods of time after death which usually lead to loss of elasticity of a bone, leaving different fracture patterns than if it were broken while was still elastic.”

A layer of spray paint is also applied to the surface of the bones so that high-speed cameras can detect surface deformations and stresses that occur during impact testing. 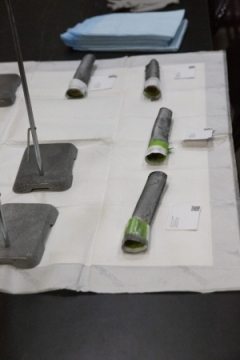 The donated femur bones are coated in a speckled black-and-white spray paint that allows high-speed cameras to capture deformations on the surface of the specimen during fracture testing. Photo by Monica Williams/ASU

“I contacted ASU initially because we needed an impact tester to induce fractures in a controlled manner,” she says.

Rajan’s team and Mayo Clinic researchers created a special device to hold a fragment of femur bone to allow an impactor to drop at a controlled and monitored rate.

“These are impacts powerful enough to shatter a bone, but they’re not as fast as a gunshot wound,” says Langley. “We go even further and use high-speed photography to measure or track the movement of bone during the fracture process.”

This allows his team to determine what forces are distributed on the bone.

Once the bone is fractured, it is turned over to Langley and his team for further examination and documentation of the characteristics of the fracture.

“One of the things we look at is the pattern of the fracture,” says Langley. “Fractures that occur at or around the time of death have a certain appearance; and those that occur much longer after death, when the bone is no longer so elastic, look different.

“We captured 5,000 frames per second and were able to tell where the weight was hitting the bone and where the cracks were propagating through the bone,” says Ashutosh Maurya, a graduate research associate who volunteered to participate in the bone tests.

Maurya is completing her PhD in Civil, Sustainable and Environmental Engineering at the Fulton Schools. Although bone testing research had a different focus than his thesis work, he felt it was an excellent opportunity to broaden his skills by exploring impact dynamics issues related to aircraft structures.

“If you look at almost any research, you’ll see people from different fields working together,” Maurya says. “It will definitely help me in my future career, as I collaborate with non-engineering professionals and manage projects in all disciplines.” 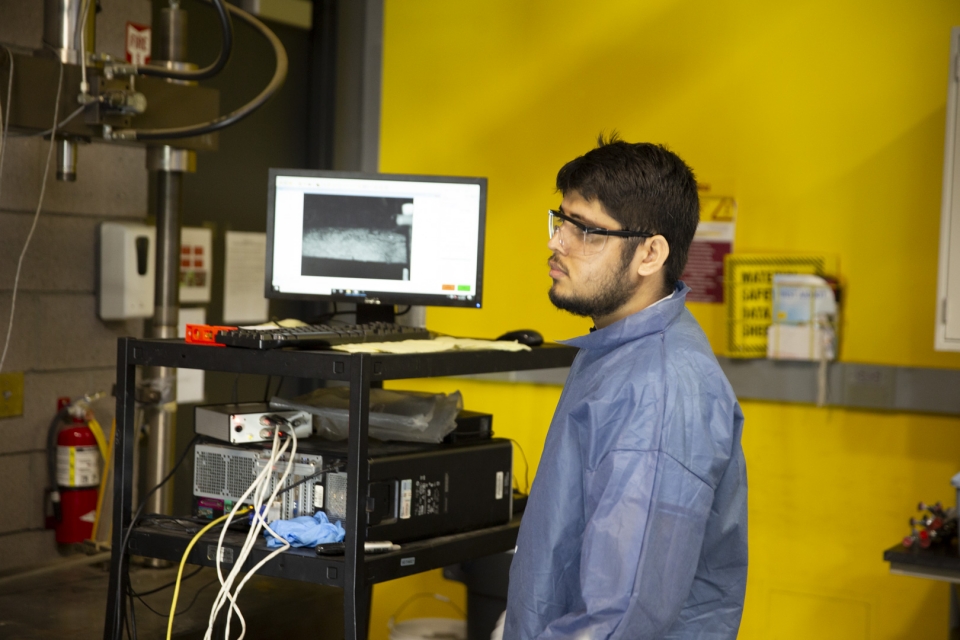 Ashutosh Maurya, a PhD candidate in civil, sustainable and environmental engineering, volunteered to participate in the collaboration with the Mayo Clinic in hopes of broadening his experience of working with individuals in different research fields. Photo by Monica Williams/ASU

It’s a philosophy that Maurya’s mentor, Rajan, has tried to instill in every student who comes through his class.

“It’s only when you start looking at the fundamental tools used to solve all these different problems that you find there’s a lot of commonality,” says Rajan. “For this specific project, we are able to have an impact beyond what is typically expected of civil engineers.”

In the coming months, Langley and his team will compile fracture test data, tracking the formations and marks left in the bones at different drying intervals. The results will then be used to create a new standard for determining when trauma has been inflicted on a victim of crime.

“Working with Rajan and his team allowed us to think outside the box in our own work,” says Langley. “Their knowledge in controlling variables by forcefully creating fractures gives validity to our work, ultimately changing the process of solving crimes and giving closure to families.”

Top photo: Natalie Langley, a consultant in the Department of Laboratory Medicine and Pathology at the Mayo Clinic in Arizona, applies fingerprint powder to a fractured bone to help see fracture surface marks left by impact . These markings are then documented to help create a new set of criteria for determining the timing of fracture events (eg, perimortem versus postmortem). Photo by Monica Williams/ASU